Travel back in time visiting the historic sites on a mesa!

Yashima used to be an island. With its unique shape and terrain, this plateau has been playing important roles in the history of Japan since ancient times. As far back as the Asuka period (592 to 710), it was known for Yashima Castle, which is mentioned in the Nihon Shoki (The Chronicles of Japan). At the end of the Heian period (794 to 1185), it was the location of an important battle in the Genpei War. In 1934, Yashima was designated as a historic site and natural monument of Japan, and many historic sites and legends are still preserved today. Why don't you visit these sites and virtually travel back in time?

The oldest ruin in Yashima is Nagasaki no Hana Kofun, a large keyhole-shaped tomb that was built around the early 5th century. It is located on Nagasaki no Hana, 50 meters above the sea, at the tip of Yashima. Its total length is approx. 45 meters. The earth mound has a three-level structure, and each level is covered with stones called fukiishi to prevent the mound from collapsing. There is no hamlet or village around it, and a boat-shaped stone coffin made of Aso ignimbrite was discovered in the earth mound looking down upon the sea. Therefore, it is thought to be a tomb of a local strong man who was involved in sea transportation. 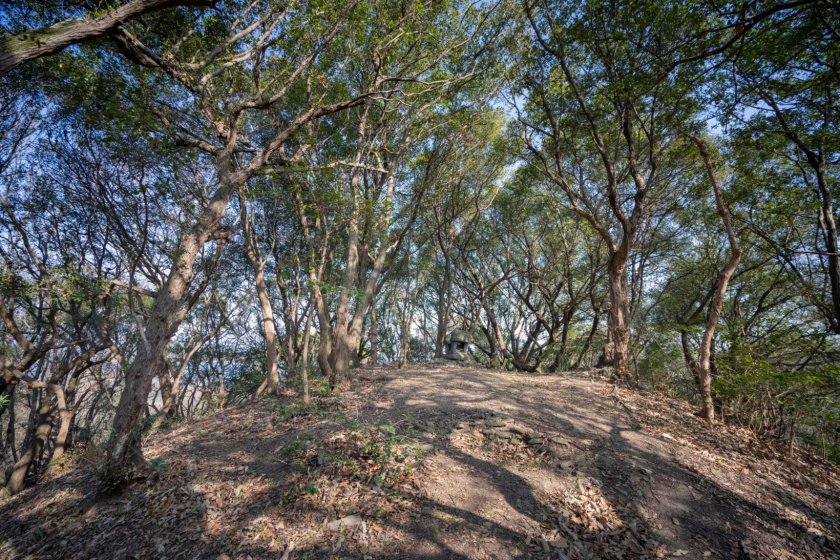 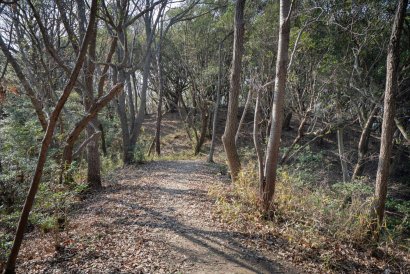 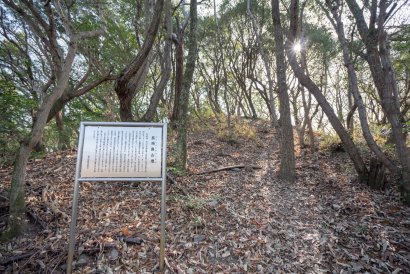 Later, in the era when Japan was called Yamato and governed by the Yamato Dynasty, many mountain castles were built in the area stretching from Northern Kyushu to the coast of the Seto Inland Sea to prepare for an invasion by other East Asian countries, including dynasties from the countries now known as China and Korea. The ancient Yashima Castle is one of those mountain castles built in this era. 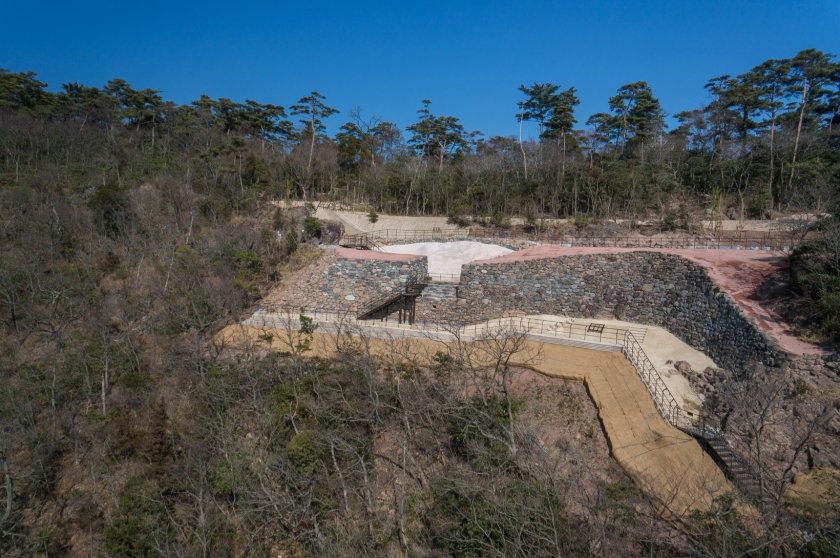 In that era, the three kingdoms of Goguryeo, Baekje, and Silla were locked in a power struggle. The Baekje, which had been devastated by a coalition of troops from Silla and Tang (a Chinese dynasty), requested reinforcements, causing Yamato to participate in the Battle of Baekgang in 663 and be defeated. Later, Naka-no-Oe no Oji ordered the building of castles at strategic traffic points to protect the country. The Nihon Shoki (The Chronicles of Japan) records that "Takayasu Castle was built in Yamato Province, Yashimanoki Castle was built in Yamada County, Sanuki Province, and Kanetanoki Castle was built in Tsushima Province."

Why was the ancient mountain castle built in Yashima?

In the ancient days, Yashima was an island in the Bisanseto sea featuring a sheer volcanic mesa. The location was perfect for a castle because it commanded a panoramic view of the Seto Inland Sea. In addition, the unique terrain with the sheer cliffs surrounding the plateau made it a natural fortress, an excellent site for building a castle. Yashima consists of two parts, that is, northern part and southern part. To date, ruins of Yashima Castle have been discovered on the southern part and in an area called Uro, which is about 100 meters above the sea. 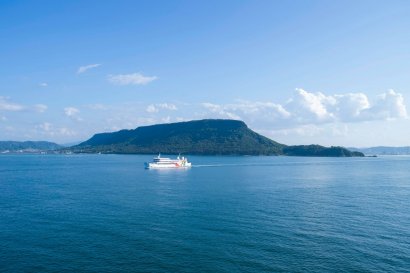 Approx. 1,350 years after it was constructed, the castle was finally confirmed to have existed.

Archaeological surveys searching for Yashima Castle began to be conducted in the Taisho era (1912 to 1926). However, it was difficult to confirm that the castle had existed, leading people to call it a maboroshi no shiro (mythical castle). However, in 1998, a part of its stone masonry was discovered buried in the mountain forest. The Takamatsu City board of education took this as an opportunity to begin an archaeological excavation. Finally, in 2002, the castle gate was discovered, proving the castle had existed. 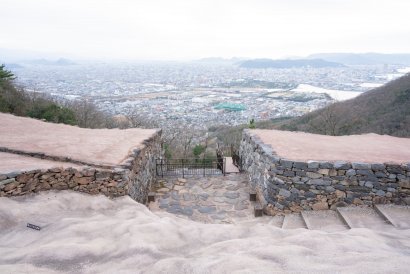 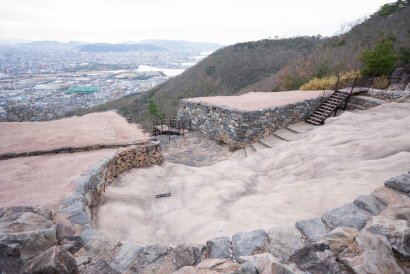 Being as much as 7 kilometers long, Yashima Castle  is one of the largest ancient mountain castles.

Taking full advantage of the natural terrain, Yashima Castle was built with one of the largest castle walls in Japan, reaching 7 kilometers. About 10 percent of the wall is believed to have been built artificially. Relics of the castle gate include remains that prove the application of castle-building techniques from the Korean Peninsula, such as Kenmon (a raised gate) and Oujou (a type of barbican). To pass on this valuable historical heritage to future generations, the city government of Takamatsu began restoration work in 2007, and the castle gate of Yashima Castle ruins was opened to the public in 2016.
However, the archaeological surveys of the castle have only just begun. With so many questions yet to be answered, this ancient mountain castle is still shrouded in mystery. It will continue to arouse the curiosity of those with a love of history. 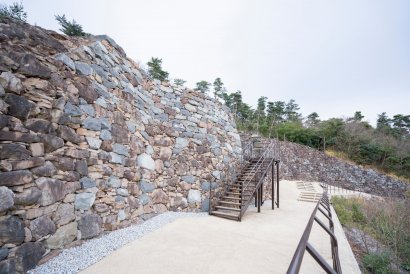 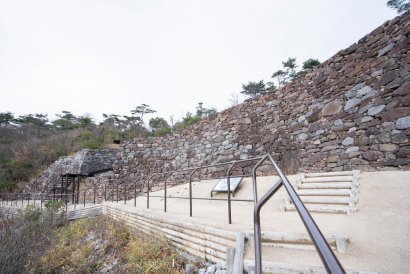 Ruins of the original Yashima Temple, built by Ganjin
Remains of Sengendo

It is said that Yashima Temple, the 84th Fudasho (temple issuing amulets) of the 88 temples along the Shikoku Henro Pilgrimage, was built on the northern part of the plateau in 754 by Ganjin (Jianzhen), the originator of the Ritsu school in Japan, when he visited Yashima on his way to the capital. It is said that in 815 Kobo Daishi visited Yashima Temple upon orders from Emperor Saga and transferred the temple buildings from northern part to their present location on the southern part of the plateau. However, the truth of this story had remained unconfirmed. Then, the remains of a building built on a foundation and a multi-spout vase identified as a Buddhist altar artifact were unearthed in a forest on the northern part during a survey conducted in 1999, revealing the site to be the ruins of a temple. At present, the lawn square in the northern part and its surrounding area is called by the old name ‘Sengendo.’ Remains of a building built on foundation stones and a place where cooking stones were collected have also been confirmed, among others. 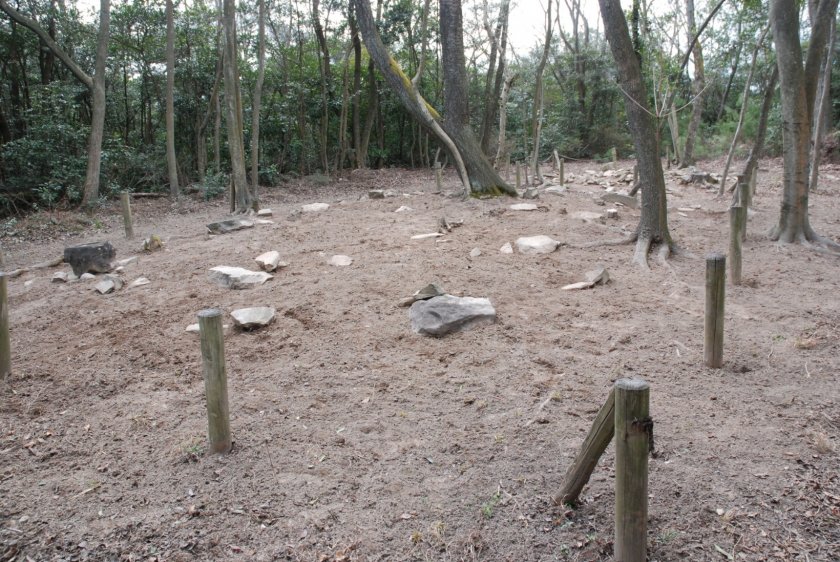