Historic Battlefield of the Genpei War

More than 800 years ago, the decisive battle in the Genpei War took place in Yashima.
It was a battle between the Taira clan led by TAIRA no Munemori, which was at the height of its prosperity, and the Minamoto clan led by MINAMOTO no Yoshitsune, a genius in battle.
The battle in Yashima decided the outcome of the war.
How did the Taira develop a stronghold in Yashima? How did the Minamoto capture the stronghold?
Traces of the battle are left in the area around Yashima, together with many dramatic tales.

What is the Genpei War?

In the final years of the Heian period (794 to 1185), The Minamoto clan rose to defeat TAIRA no Kiyomori, who had supreme power, beginning a war with the Taira clan, which came to be known as the Genpei War. From 1180 to 1185, the Minamoto and the Taira fought battles across Japan, until the Taira were defeated in Dannoura, Yamaguchi. Why don't you relive historical moments by visiting various historic sites around Yashima?

Initially, the Taira had a tremendous advantage in the Genpei War. However, the family began to lose ground after the death of TAIRA no Kiyomori, and experienced loss after loss. After the catastrophic defeat in the Battle of Ichi-no-Tani on February 7, 1184, the Taira established a stronghold in Yashima, Sanuki, hoping to rebuild their strength.

Gate built by the Taira to protect the temporary palace
The Taira brought Emperor Antoku, who was still a child, to Rokumanji Temple in Mure-cho, Takamatsu, making the temple a temporary imperial palace. They built a gate to defend it from naval attack and tried to rebuild the strength of their forces. 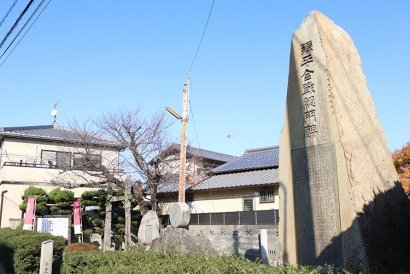 Former angu (temporary imperial palace), where child Emperor Antoku is enshrined
It is said that the Taira later moved the temporary palace to Antoku Tennosha (Emperor Antoku shrine) in Yashima and built residences for family members in the area. After abandoning the capital in 1183, the family was forced to leave Dazaifu in Kyushu and finally came to Yashima. Emperor Antoku was only six years old at the time.
*The temporary palace was built by the Awa, the local ruling family. A memorial tower the Taira warriors who had laid down their lives in the Genpei War has been built in the back of the shrine grounds. 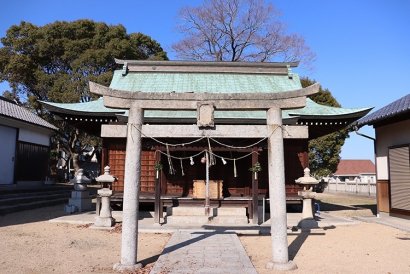 A cove where the Taira hid their warships to prepare for the Minamoto invasion
Why did the Taira choose Yashima? One of the reasons is said to be its terrain. In those days, Yashima was an island that was hard to invade. In addition to this advantage, the island had coves and ports that were convenient for ambushing enemies. Believing the Minamoto would surely come from the sea, the Taira dispersed naval forces throughout the Seto Inland Sea.
*On the Aji Peninsula across the bay from Yashima, has a cove perfect for hiding boats. The Taira established their naval headquarters here. This cove is still called Funa-kakushi (Ship Sheltering Cove) to this day. 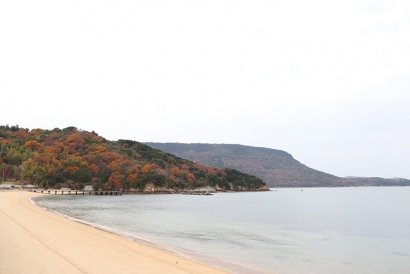 Setting sail in the storm

MINAMOTO no Yoshitsune, who had been ordered by his elder brother, Yoritomo, to subdue the Taira, massed the Minamoto forces at Watanabe no Tsu Port in Settsu (now known as Osaka) on February 16. They set sail on the following day, February 17, but a storm forced them to stop. In the middle of the night, however, they set sail with only 50 boats, reflecting Yoshitsune's strong will to "set sail at any cost." With 50 horses and 150 soldiers embarked, the Japanese boats sailed southward through the Kii Channel at tremendous speed, traveling approx. 120 kilometers in only six hours. They arrived at Katsuura in Awa (Tokushima) the following morning.

Behind Yoshitsune's aggressive troop movement was battlefield intelligence and an excellent ability to take the initiative. He has been called a genius in battle. His tactics included the use of the tailwind and support from Watanabe family, who had complete knowledge of the sea area. Adding to their luck more than anything was that Yoshitsune was fully prepared to die. Seeing the stormy sea in front of him, Yoshitsune left the following words.
Koto ni zonnen ari. Ichijin ni oite inochi wo sten to su. (Here is one thing that I keep in mind above all else; I want to die in the vanguard of troops.)

Landing of the Minamoto troops on Shikoku

After landing at Katsuura, Awa at 6:00am, Yoshitsune wasted no time in riding towards the enemy's stronghold. Using KONDO Chikaie, a local strong man, as a guide, Yoshitsune's troops traveled approx. 60 kilometers on land, until they arrived in Takamatsu behind Yashima.
At 8:00am, they arrived near the Taira's palace in Yashima, and Yoshitsune ordered his men to set fire to commoners' homes nearby. Having expected the attack to come from the sea to the north, the Taira were surprised to see the Minamoto approaching from the south. Further, the blazing homes of the commoners deceived them into thinking that a great horde of attackers were coming. The Taira escaped into the sea.

A pine tree at which Yoshitsune rested before arriving in Yashima
After days without sleep, Yoshitsune and his men finally rested with Yashima in front of them, near a pine tree called Kurakake no Matsu (Saddle-hanging Pine Tree). It is said that Yoshitsune removed the saddle from his horse and hung it from a branch of this pine tree. 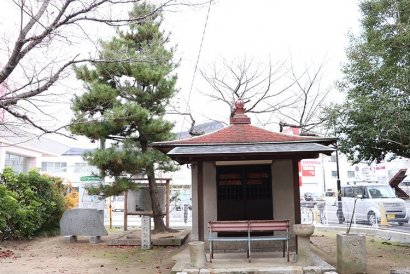 The place where the Minamoto troops released red cows before getting over to Yashima
Having taken the initiative, the Minamoto troops tried to invade Yashima and quickly push into the palace of Emperor Antoku at once. However, they found it difficult to get over to the island because they were hampered by the sea. It is said that they first released tens of Japanese red cows into the sea to find the shallows and then landed on Yashima. 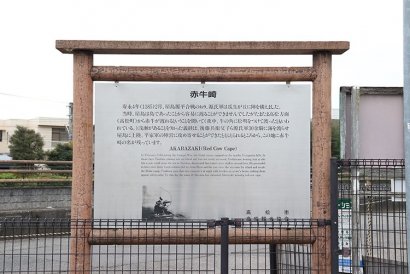 It was a spring tide day, and the water level was very low at 8:00am. It is believed that Yoshitsune had been told earlier by KONDO Chikaie that "At low tide, the water level is only as high as the torso of a horse."

The Minamoto set fire to the palace, and the Taira escaped into the sea. The battle gave birth to many legendary tales that are still being passed down through the generations. While the Taira were initially surprised by the raid, TAIRA no Noritsune, the best archer in the capital, took aim at Yoshitsune, the leader of the Minamoto troops, and released an arrow. At that moment, SATO Tsugunobu, one of Yoshitsune's vassals, stood in the way and took the arrow for Yoshitsune.

The place of the martyrdom of SATO Tsugunobu, a great Minamoto general
Iochibata is the legendary place where SATO Tsugunobu, who was considered one of the four best generals of the Minamoto, lost his life. A stone monument erected by Tsugunobu's descendants in 1931 marks the location. 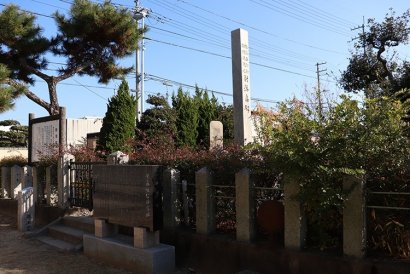 The grave of a young Taira warrior
Kikuomaru, a young warrior serving Noritsune, ran up to Tsugunobu, who had been shot by arrow by Noritsune, in an attempt to behead him. Tadanobu, the younger brother of Tsugunobu, shot Kikuomaru with his arrow to prevent him from beheading Tsugunobu. 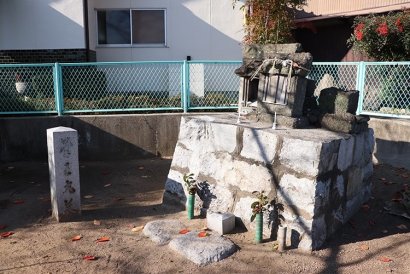 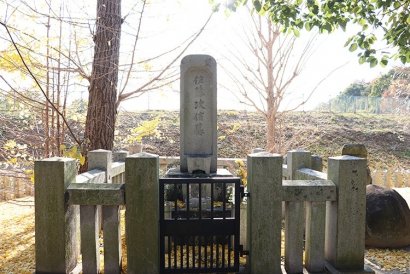 A monument set up by MATSUDAIRA Yorishige to honor the loyalty of Tsugunobu, who sacrificed himself to protect the general
SATO Tsugunobu lost his life taking an arrow for MINAMOTO no Yoshitsune. MATSUDAIRA Yorishige, the first lord of Takamatsu, established this monument to ensure that the story of Tsugunobu's loyalty as a warrior would continue to be known. It is said that Yorishige visited this place and offered a prayer to Tsugunobu in 1642, immediately after he was assigned to Takamatsu. 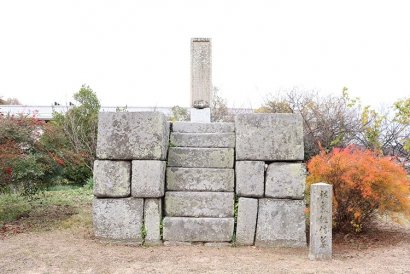 The Family temple of SATO Tsugunobu
This is an old temple, which is said to have been built by Kobo Daishi during the Daido period (806 to 810). It is said that, during the Genpei War, Yoshitsune's troops brought wounded warriors to this place. Tsugunobu is also said to have been carried on a door board to this temple when he was dying, leaving some of his weapons and shoulder guards. 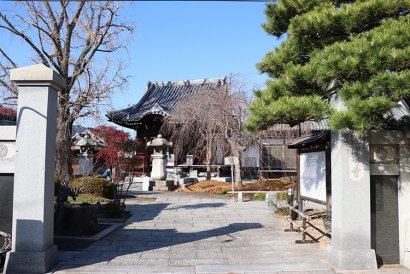 The grave of Yoshitsune's beloved horse
Tayuguro is the name of a horse that was given to Yoshitsune by Emperor Emeritus Go-Shirakawa. It was this beloved horse on which Yoshitsune descended the cliff during the Battle of Ichi-no-Tani. It is said that Yoshitsune, who was grieving for Tsugunobu's death, gave this valuable horse to the priest of Shido Temple as a reward for prayer for his deceased subordinate. 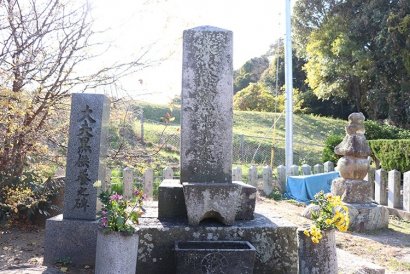 While Yoshitsune was not so tall, being about 160 centimeters in height, he fought on the front lines himself. He was also benevolent, grieving over the death of his subordinate. This aspect of Yoshitsune won the hearts and minds of his men, and many warriors pledged their fealty to him.

A Minamoto bivouac
After the first day of battle, the Minamoto warriors encamped at Uryugaoka. 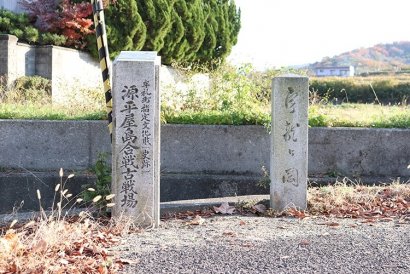 The place of the legend of Musashibo Benkei
In camp headquarters, people provided logistics support for the battle, including the preparation of meals. Among these people was Musashibo Benkei, the legendary warrior priest who was renowned for his wisdom. There are several legends about him. Naginata Izumi is the remains of a well which is said to have been dug by Benkei with a naginata (a Japanese glaive) to get water for cooking. A Jizo statue that is said to have been used by Benkei as a chopping block (Nakiri Jizo) is located close to this well. 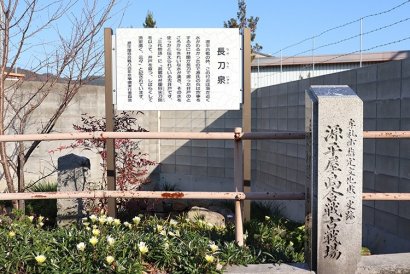 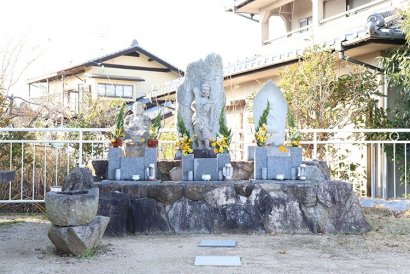 End of the battle

The battle began again the next morning. Various legendary events took place while the Taira and Minamoto armies pushed back and forth. The legends reveal the ferocity of the battle.

Yoshitsune Yuminagashi no Ato (Site where Yoshitsune dropped his bow)

An anecdote reflecting Yoshitsune's pride as a warrior
Having pursued the Taira too far, Yoshitsune accidentally dropped his bow into the sea. He recovered the bow with a rake, ignoring his men who tried to stop. He explained, "I didn't want to be disdained by the enemy, who could have said, 'The bow of Yoshitsune is light, unlike the heavy bow of his uncle, Chinzei Hachiro Tametomo.'" It is said that this legendary escapade impressed Yoshitsune’s subordinates and revealed his pride as a military commander. 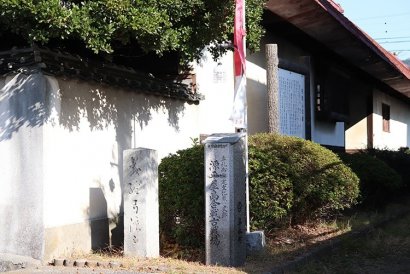 One-on-one battle of strong men from the Minamoto and the Taira
AKUSHICHI Byoe Kagekiyo, one of the strongest Taira warriors, and MIONOYA Juro, a commander of the Minamoto forces, had a fierce, one-on-one battle. Kagekiyo hooked the helmet of Juro as he was running away and tore off the shikoro. This story reveals both how powerful Kagekiyo was and how strong Juro's neck was.
*The shikoro is the neck guard or aventail suspended from the sides of a helmet. It is usually made of leather or card-like pieces of iron called tetsusane. 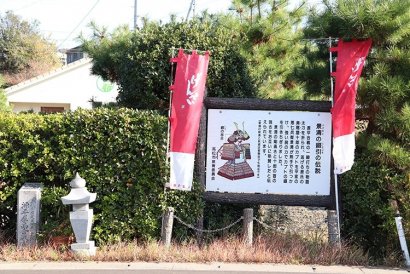 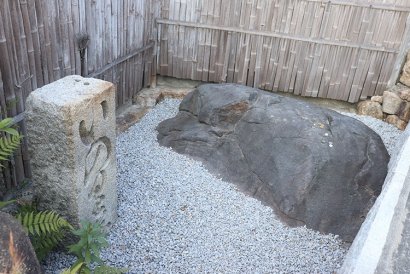 The rock Yoichi stood on when he released the arrow
Under pressure to never make a bad shot, Yoichi released an arrow, which brilliantly hit the target. Warriors on both sides applauded. The fan target is believed to have been a trap set up by the Taira to lure Yoshitsune, but this attempt was unsuccessful as Yoshitsune had detected the ruse. 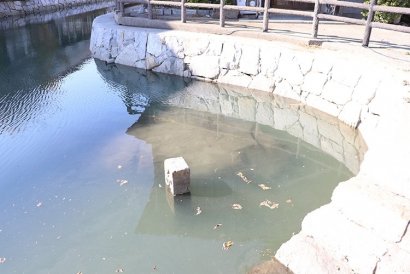 Later, the Minamoto quickly gained momentum when warriors from Awa and Sanuki joined them. The Taira abandoned Yashima and escaped far away to Saikai, to be ultimately defeated in the Battle of Dannoura in present-day Yamaguchi on March 24 of the same year (1185).