Learn from Mushi Mushi Hakase (Doctor of Bugs) in outdoor observation in Yashima.

Yashima has diverse environmental elements in a compact space, including the flat summit, forests, cliffs, seas, and human dwellings.
One great attraction of Yashima is the ability to observe a diverse population of creatures, including rare species, that make this the environment their habitat.
Go out looking for something exciting. Let's see what creatures you encounter.

He is a specialist with deep knowledge of the relationships between the environment and the biology of bugs and other creatures.
He is popular for his witty explanations. He is also an influencer who persuades people to become insect lovers. 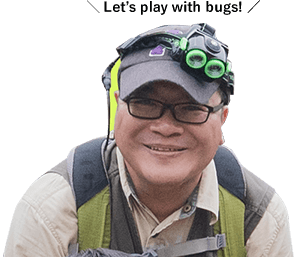 The name Yashima (lit. roof island) was given to this hill because its top looks like a roof. The northern part of this gently-sloping plateau or mesa is about 282 meters above sea level, and the southern part is approx. 292. Lava ejected horizontally from a volcano about 14 million years ago, and the surroundings and top eroded, resulting in the geographical formation. Its base is granite, and the middle and upper parts are a tuff deposit. On top of that is a horizontal layer of sanukitoidic andesite. 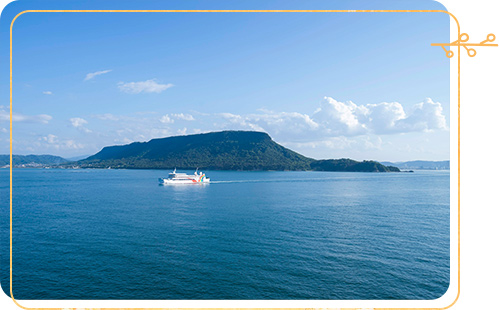 In Yashima, 980 species of plants have been confirmed to exist, and 698 of them are native species. Most of the pine forest that was destroyed by pine bark beetles has become deciduous broadleaf forests including oriental oak and konara (Quercus serrata). There is also a pure ubame oak forest and mountain cherry trees and Japanese wax trees show their seasonal colors. 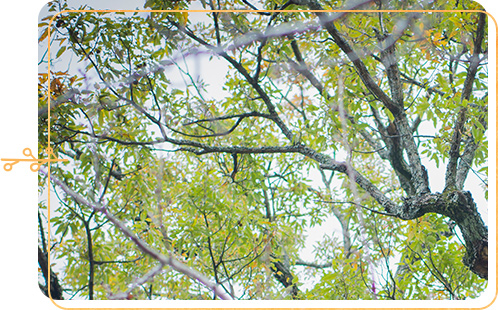 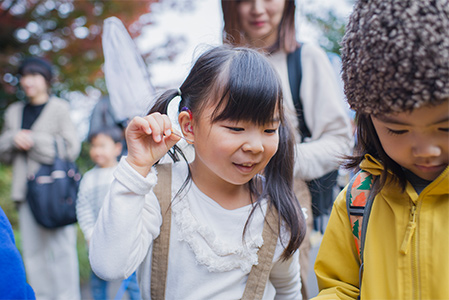 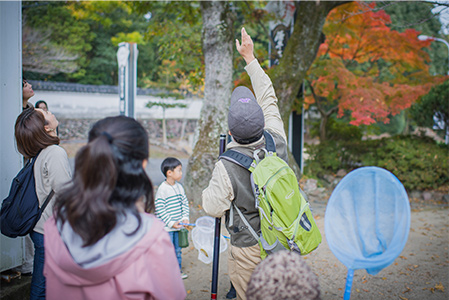 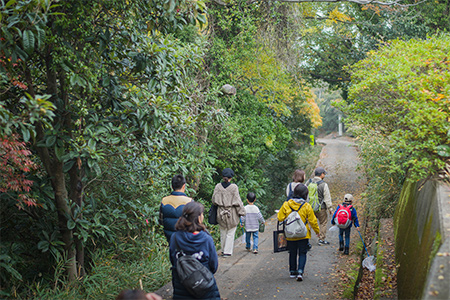 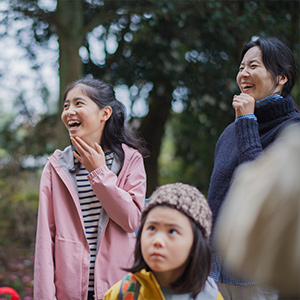 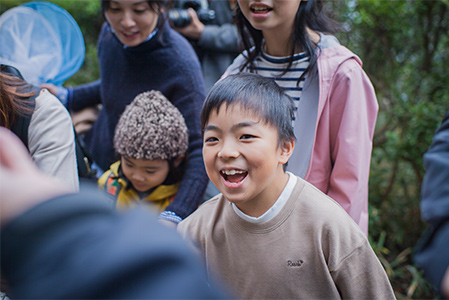 With a mountain, sea, rivers, tidal flats, and human dwellings, Yashima is a perfect place for outdoor observation. It is estimated that Yashima is a home to 19 species of mammals, which constitute about 50% of all mammal species that live in Kagawa. In addition, 79 bird species, 750 insect species, and 48 snail species have been confirmed to live in the peninsula. Reptiles, amphibians, and crustaceans also live in the area. With all this life, Yashima attracts attention from biologists doing field observation work.

When observing creatures, it is important to think what creatures exist where and when, and why they are there.

Plants on the summit of Yashima

They are known to make their habitat only on the layer called Sanuki Group.

Yashima is an important osprey breeding site.
They make nests on top of red pine trees.

Southern part  Shishi no Reigan Observation deck, Northern part  Uomidai Lookout Point
Not only can you look up at them but you can also look down at them while they are flying.

Tidal flat at the mouth of Shinkawa River
When the tide comes in, they fly from the direction of Yashima and you can watch them catch fish. 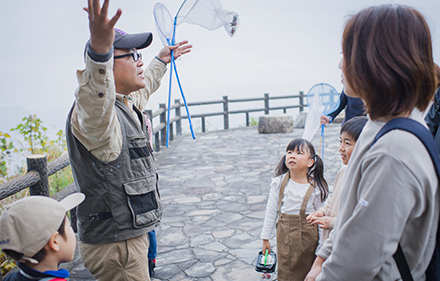 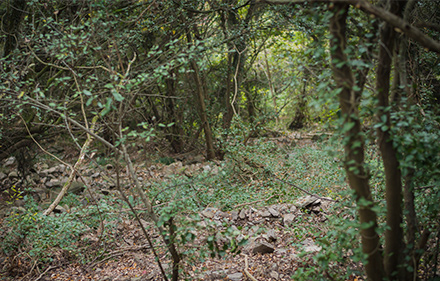 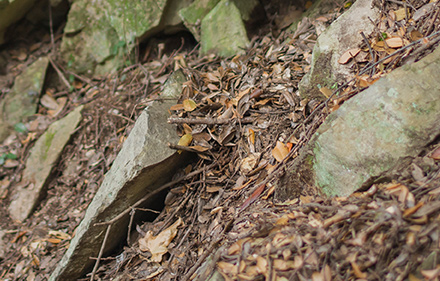 I will tell you where you are likely to find insects.

Around Yashima Summit Tourist Parking Lot
On a moonless summer night or when the moon is hidden by cloud on a summer night, you may find a unicorn beetle or stag beetle on a road near a streetlight, vending machine, or building.

Nocturnal insects fly at a constant angle relative to the moon as the light source.
Those insects are active when the humidity level is high, such as after the rain, because they are intolerant of dryness.
On a moonless night, they gather to light from artificial light sources, mistaking it for ultraviolet rays from the outer space.

This species of moth lay eggs on oriental oak trees. Its larvae scratch the bark to let the sap flow out and prey on insects which are attracted to the sap.

A spiderweb close to a streetlight
You may find rare insects around a spiderweb.

Insects trapped in a spiderweb let off a smell (pheromone) to attract other individuals of the same species. 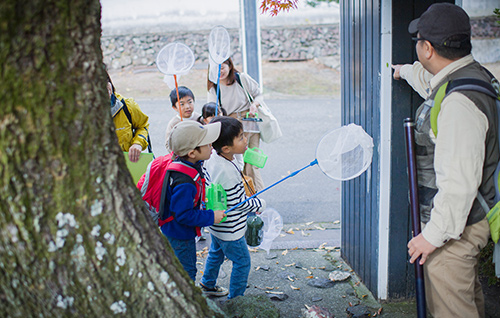 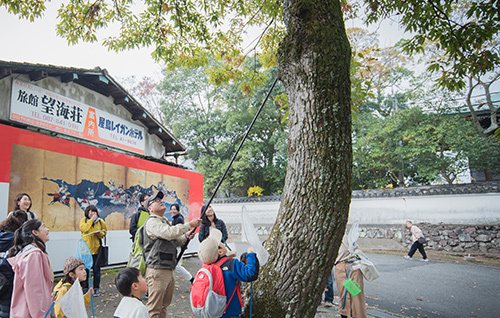 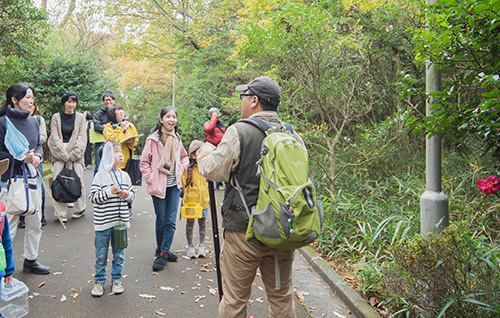 *Also observe gutters, drains, cracks in trees and rocks, and areas around plants with eaten leaves.

You may find rare species or ladybirds.

Sengendo Open Space in the northern part Pond
This is a natural pond, or a pool of rainwater remaining on the ground above a layer that is hard for water to penetrate. It is a habitat for Marutan Yanma (Anaciaeschna martini), a rare species of dragonfly that fly at dusk. Aoyanma (Aeschnophlebia longistigma), another species of dragonfly, is also likely to live here. Japanese brown frogs, Japanese toads, and their tadpoles also live in this pond.

Pure water on the summit with no farmland around it means that it does not contain agrochemicals and is an optimal breeding site for dragonflies and other species. Another key point for dragonflies is that there are a lot of waterweeds in the water, which serve as their spawning site and allows their larvae to hide themselves.

Sengendo Open Space in the northern part restroom wall
Around December, a flock of ladybirds is seen here.

The wall collects solar heat and irradiates infrared rays, to which the insects are attracted. Because the side exposed to the sun dries them, the ladybirds move to the back side. Here they spend the winter in a flock to retain the moisture from their breathing. Stink bugs spend the winter the same way.

Yashima is noted for snails.
Of the 130 species of snails confirmed to live in Kagawa,
48 species, or 37 percent of them, make their habitat here. 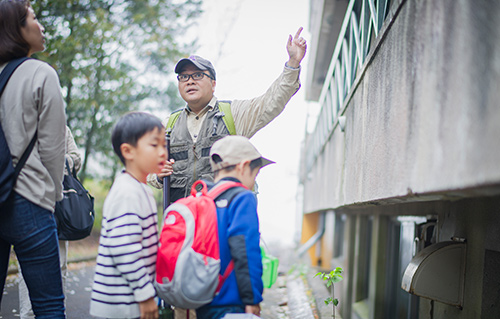 Cracks are safe havens for creatures.

Walking trail from Southern part to Sengendo Open Space in the northern part
Eggs, babies, and adult geckos (Gekko tawaensis) are found in crack in rocks and trees. If you try to drag one out, it expands its body.

The natural predators of these geckos are snakes. Being dragged out by a snake means death. This is why the lizard expands its body to resist the dragging force. A gecko has toepads, with many tiny hairs on the underside of it toes. It is these hairs that allow the lizard to stick to a wall or the similar surface.

How to catch a gecko

Fill up the gap behind the tail and one in front of the head, thereby blocking its escape routes. Catch it when it comes out of the crack. 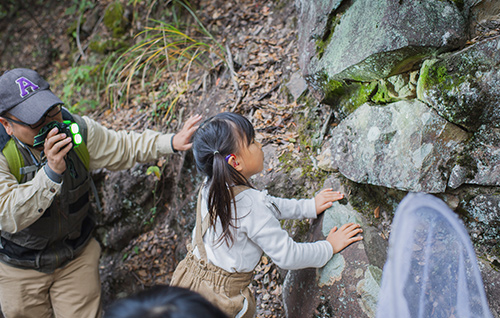 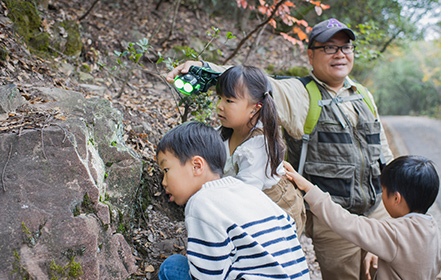 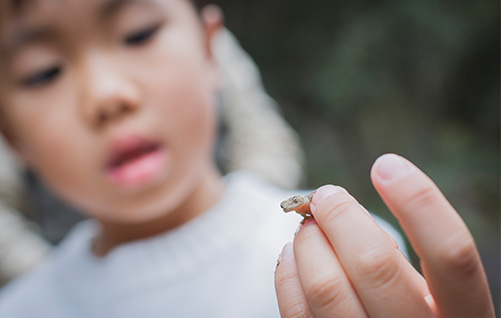 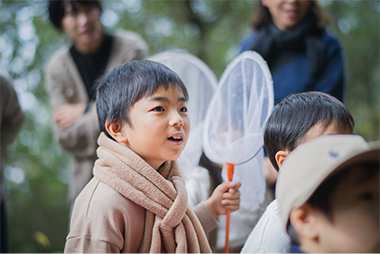 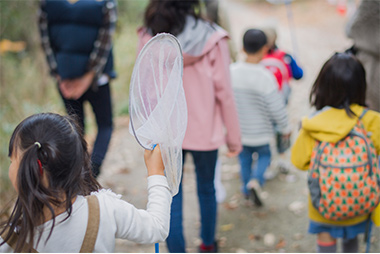 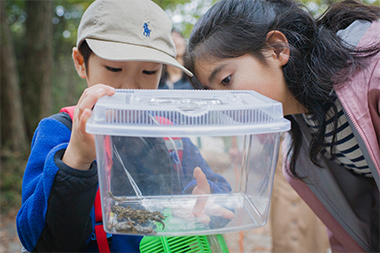 Everything children find, including places where a particular insect stays and the direction that plants face, has a meaning. And children get interested in it. When they are curious about something, their eyes shine, and they seek information aggressively and act assertively.
It is important that adults do not prohibit children from acting out of curiosity for the convenience of adults or at their discretion.
Outdoor observation develops sensitivity and a sense of self-affirmation. It develops the capability to observe, think, and solve problems. Children who don't like bugs or larvae will get interested in them if you use words like eggs and babies. Children should touch and raise bugs and learn through trial and error. It is important to cry over the death of an insect that they have caught. At the end, they bury the insect, build a tomb, and pray for the dead insect. This whole process serves as a valuable learning opportunity.
Yashima is the optimal place for children to observe the outdoors.
Let's hope that their experiences here in Yashima will lead some children to be great scientists!

Precautions!Make sure to be accompanied by an adult.

Dangerous creatures that you may encounter in YashimaKeep away from them.
Hornet, Japanese copperhead, Wild boar

Creatures that you must not bring home or move to other placesInvasive alien species
Do not catch these creatures. They destroy the native ecosystem.
Control of invasive species