A gorgeous driving tour full of attractions as you enjoy the Yashima, Mure and Aji area!

The Yashima, Mure and Aji area is wonderful for sightseeing
and has good access from the center of Takamatsu City,
which in a small area accommodates superb scenery, leisure locations,
and the delicious food of the Seto Inland Sea.
It's a recommended tour for those seeking a fun and carefree drive along the Seto Inland Sea. 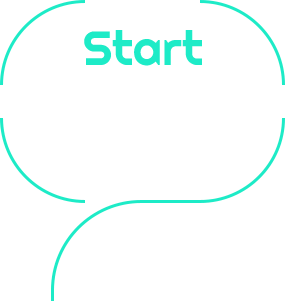 It is recommended that visitors to Yakuri Temple use the old-fashioned cable car, from which they can enjoy the view of cherry blossoms in the spring and the changing leaves in the autumn. 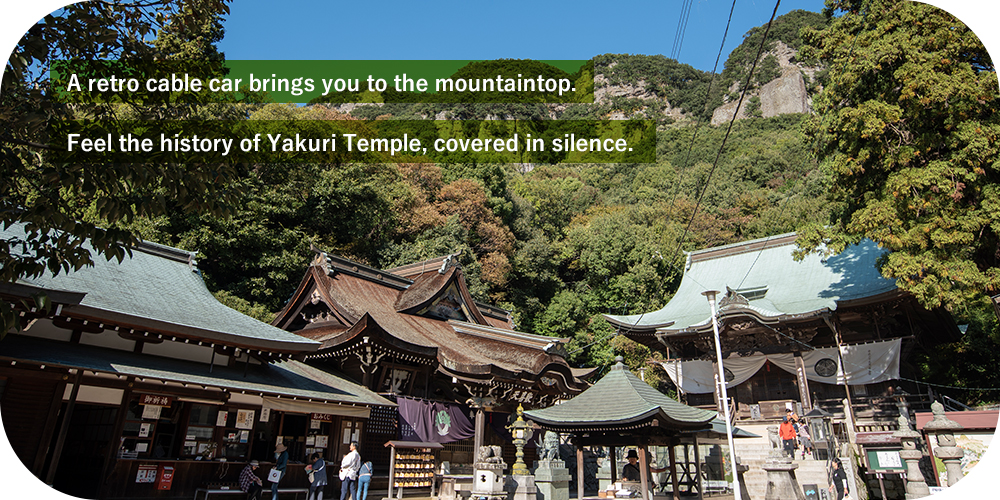 Temple No. 85 on the 88 temple Shikoku Henro Pilgrimage Yakuriji

Built about halfway up Mt. Goken, this temple is the 85th Fudasho (temple issuing amulets) of the 88 temples on the Shikoku Henro Pilgrimage.

Experience Aji-stone, which is acclaimed as the best stone in the world, and art. 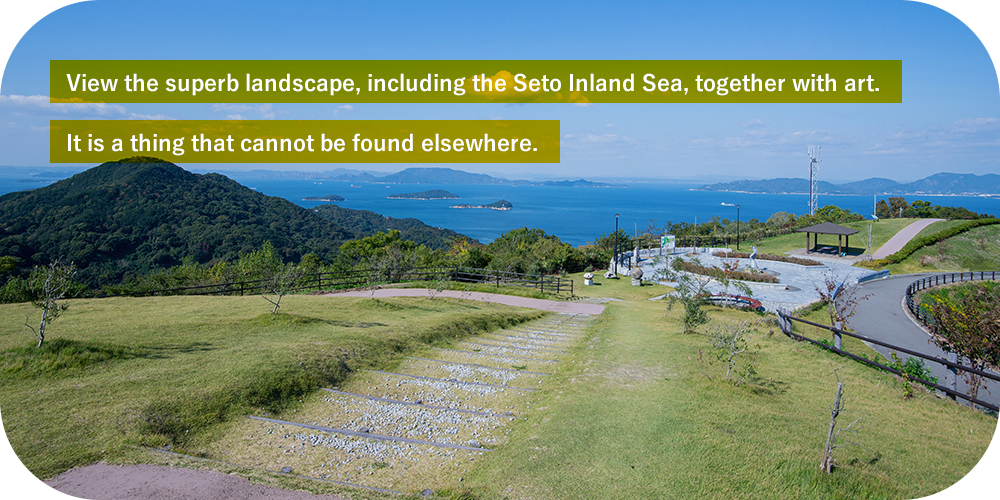 True to the concept, “a park that makes you feel the landscape of Seto,” this park commands a panoramic view of the islands in the Seto Inland Sea. You can enjoy seeing and touching the sculptures, which are displayed in a way integrated with the landscape. The watch-shaped observation deck is a work of art from the Setouchi Triennale 2016. The watch face is designed to function as a sundial.

Enjoy the sea of Aji 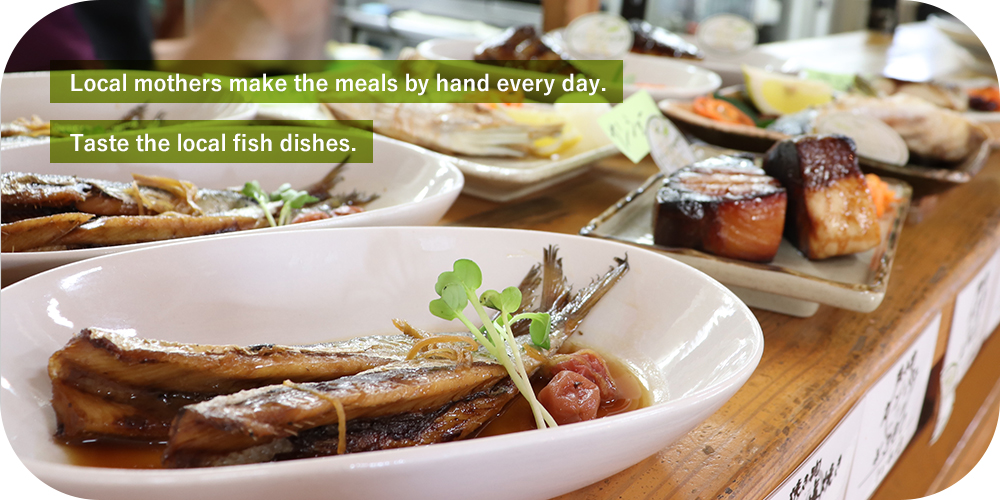 Address
631-7 Murecho Hara, Takamatsu, Kagawa [Google Map]
Tel
+81878456080
Business hours
Monday to Friday 11:00-14:00 | Saturday, Sunday and National Holidays 11:00-15:00
Regular holidays
1st and 3rd Tuesday of the month (Open on the above days as well and closed on the following days when the above days are national holidays, in principle)

Take a rest at nearby Fusazaki Park. If the timing is right,
you can see the Kotoden train running along the local railroad next to the sea.

In winter, enjoy grilled oysters at the oyster hut in Mure. 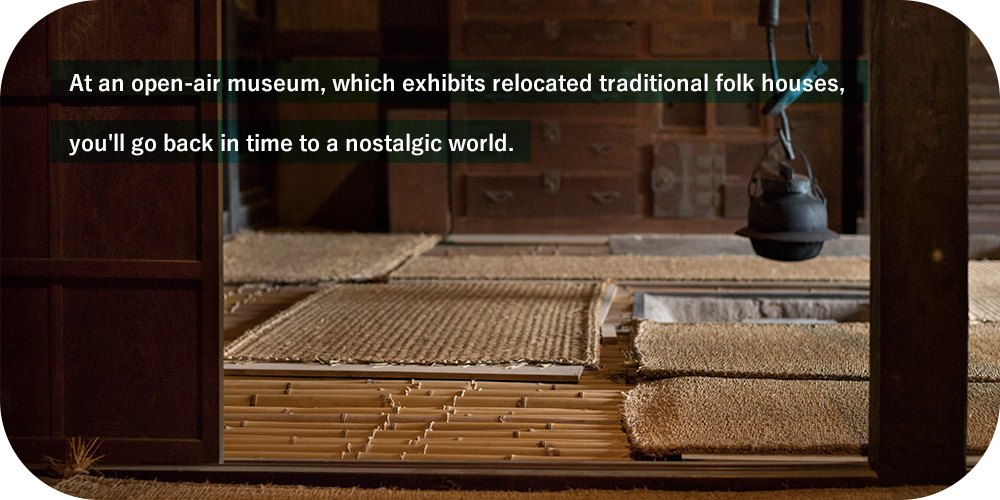 This outdoor museum is located at the base of Yashima and displays 33 old folk houses and examples of historical architecture relocated from all over Shikoku. The 50,000 m2 site features buildings that display a rich variety of local flavor and were built during the Edo (1603 to 1868) or Taisho (1912 to 1926) eras. The museum also displays tools and items used by the people of those eras, showing you how they lived daily.
The museum includes the Shikoku Mura Gallery designed by architect Tadao Ando, which displays paintings, sculptures, and Oriental works of art, among other exhibits. Also popular among visitors are Udon-no Waraya, a home-made udon noodle restaurant within a renovated old folk house with a thatched roof, and Tearoom Ijinkan, in a Western-style residence, or ijinkan, moved from Kobe.

Go to Yashima Sanjo via the Yashima Skyway. 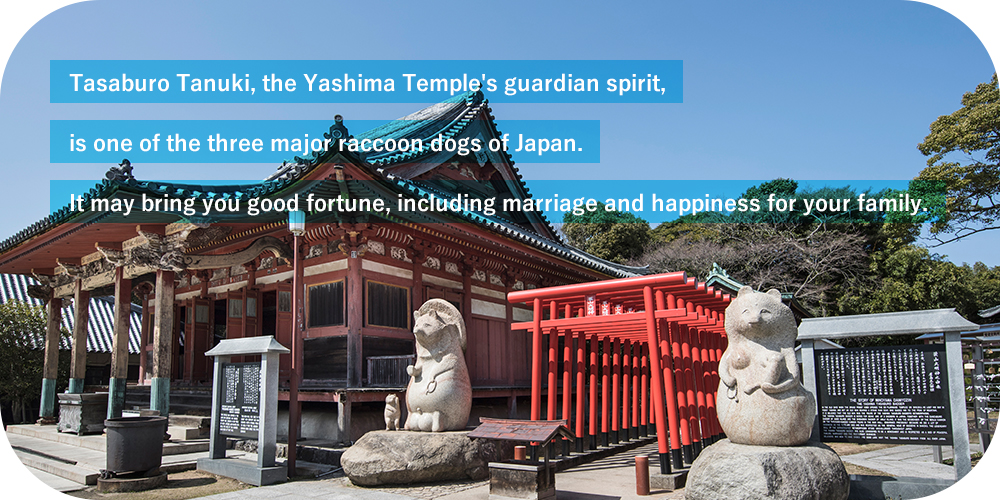 Temple No. 84 on the 88 temple Shikoku Henro Pilgrimage Yashima Temple

The history of this temple goes back to 754, when Ganjin (Jianzhen), a Chinese monk, built the temple building Fugendo on the northern part of Yashima and enshrined within it a statue of Fugen Bosatsu (Samantabhadra Bodhisattva) and a Buddhist sutra, which he had with him. Later, a pagoda was built by Eun Risshi from Todai-ji temple’s Kaidan-in, who was a disciple of Ganjin. He also built a monastery, named the temple Yashima Temple (Yashima-ji), and became its first abbot.
In 815, Kobo Daishi visited Yashima-ji upon orders from Emperor Saga and transferred the temple buildings on the northern part to their present location on the southern part. He also carved an eleven-faced, thousand-armed statue of Kannon (Avalokiteshvara) and enshrined it as the temple’s principal idol.
During the Tenryaku period (947 to 957), Meitatsu Risshi dedicated the Shitenno (four heavenly kings) statues. The current principle icon of the eleven-faced, thousand-armed Kannon was created at that time. It is designated as an important cultural property of Japan.
The main hall of the temple, which is also designated as an important cultural property of Japan, was built in the Kamakura period (1185 to 1333). During the Edo period (1603 to 1868), it was renovated many times with support from successive local lords. This friendly aquarium values contact with animals, and staff members work close to visitors. Over 1,000 animals, including approx. 130 species of fish, aquatic mammals, amphibians, and other animals, from habitats ranging from the tropics to cold-water habitats live in the aquarium’s approx. 80 large and small tanks. You can also see rare species such as the Caribbean manatee and the pirarucu, a giant fish from Amazon river. The aquarium also has dolphin and seal shows. 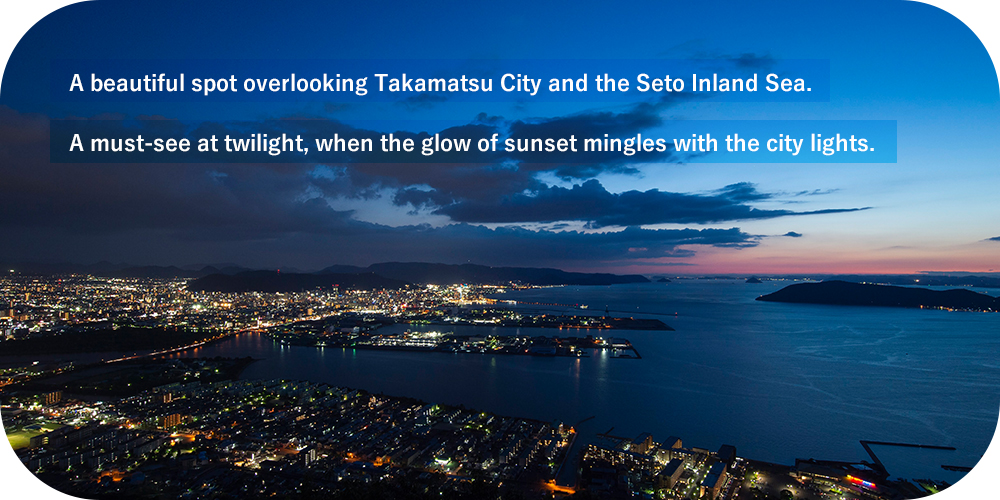 Shishi no Reigan Viewpoint is an observation deck with a stunning view of Takamatsu City and the Seto Inland Sea, including Ogijima and Megijima. Below the observation deck is the viewpoint’s namesake, a rock which looks like a lion, or shishi, roaring at the sea. Here you can also enjoy kawarake-nage, the throwing of small pieces of dish-shaped earthenware to wish for good luck and ward off evil spirits.

This is one of the three major observation decks on Yashima. It commands a view of Dannoura, the historic battlefield where the last battle between the Minamoto and Taira clans took place, as well as Shodoshima, Mt. Goken, and others.
MURAKUMO Nichiei, a nun, named Shishi no Reigan when she climbed Yashima in 1897 to commemorate the warriors of the Minamoto clan and the noblemen of the Taira clan.
It is located along the trail that leads from Yashima Sanjo Kanko Chushajo, a parking lot for tourists on the summit of Yashima, to the northern part (Yukakutei).

Yukakutei is one of the three major observation decks in Yashima, with the two others being Shishi no Reigan Viewpoint and Dankorei. Located at the tip of the northern part, this place boasts a 320-degree view, allowing you to fully enjoy the soothing landscape of Bisanseto area, including Shodoshima, Megijima, and rice-ball-shaped Ozuchijima and Kozuchijima.
Princess Nagako (Empress Kojun) named the northern tip of Yashima Yukakutei when she visited Yashima in 1923.

At the end of the trip,
enjoy the special gourmet foods
of the Yashima, Mure and Aji area. 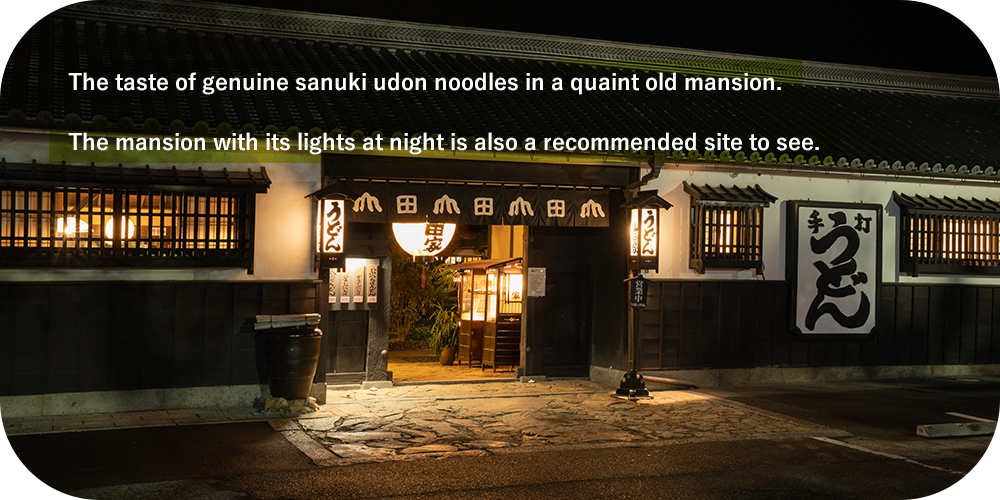 An udon noodle restaurant in a renovated old mansion with a historic sake brewery. Enjoy a leisurely meal in a laid-back atmosphere on tatami or a table sheet, while viewing the garden.
Chefs are particular about the simple ingredients of udon noodles, flour, salt and water, and the old-fashioned method for making them, stomping, the chrysanthemum pattern and hand kneading. These characteristics attract many fans from inside and outside the prefecture. 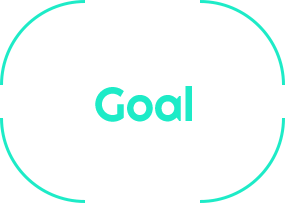 And many other delicious foods